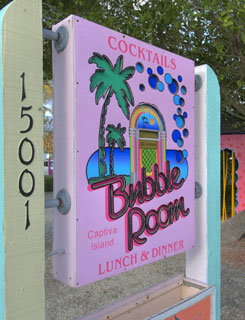 The Bubble Room was born in 1979 on its present site on Captiva Island. The world famous restaurant that it is today followed a very modest beginning of just a few tables in the front room of the home of the Farqhuarson family. Today’s famous multi- theme restaurant slowly took shape. Starting with old toys from the 1930’s and 1940’s as its décor in the one room, the collecting began and has continued to the present day.

Many of the original items are still seen here today along with the moving trains now on all three floors added for kids (of all ages). Popular with the many visiting stars of cinema in its early years, photographs soon began to adorn the walls and grew to the profusion of old idols and scenes from the big screen, now seen around you on every available wall space. The front room was decorated for Christmas and the additional theme of “its always Christmas at the Bubble Room” took shape with the introduction of many Father Christmases, the Elf Room and year round Christmas lights. The present owners have followed and developed these original ideas faithfully adding more and more fantastic toys and decor.

In the early days old favorites recorded on private tapes were played as background music. Later came the extensive collection, all composed in the 1920’s,1930’s and 1940’s, that you hear today

The Bubble Room was one of the first on the Island to introduce the bright and cheerful pastel colors now widely used on the island.

The restaurant still presents several of the distinctive original menu items offered by the Farqhuarsons, including such favorites as Socra cheese, Bubble Bread, Carolina Moons, Tarzan, Eddie Fisherman, and many of the delicious and oversized desserts. Enjoy your visit to the now famous Bubble Room Restaurant.